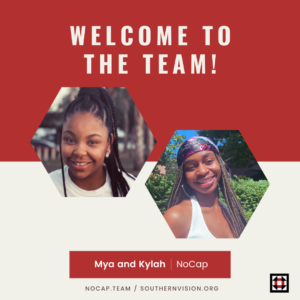 As staff, they’re coordinating NoCap’s efforts to build the power of young Black and brown folks on campuses and in communities statewide. This includes the Fall 2021 NoCap Fellowship, launched this week!

We sat down to ask them about their background and their most no cap takes.

You both got involved with NoCap as fellows in early 2020. Is there a memory from your time in the fellowship that you come back to?

Kylah: It was canvassing to register people to vote on Central’s campus last year. It was my first time coming out and being acquainted with NoCap. Even though I was new and some of the team had gelled, I felt really welcome. It was easy for me to do the work because of the atmosphere that was set by Jonah [Vincent, NoCap Director], the other fellows, the other staff. Sometimes organizing can be intimidating coming into new spaces. I came with my A&T hat on, too!

Mya: It would be our time canvassing in the Braggtown neighborhood of Durham. It was heavy for me personally. We were there to tell folks about early voting. Seeing the conditions of folks in the neighborhood—they had so much going on. It wasn’t fair to say just go vote. It was about connecting with them, giving them food, being there to listen. At first it didn’t seem like people wanted to talk, but then they wouldn’t stop talking. For that I was appreciative.

Now you’re on staff with NoCap. You’ve been through the fellowship. You’ve seen behind the scenes. What would you say is NoCap’s secret sauce?

Mya: Black youth. Conscious Black youth. It’s one thing to be young and Black, but to be young, Black, and conscious is a whole different story. It can be intimidating to our counterparts sometimes.

Let’s go back a bit. Was there a moment or spark that got you involved in organizing?

Mya: For me, it was the ongoing instances of police brutality. Also all the issues with healthcare—seeing how people that look like me always get the short end of the stick.

Kylah: The gerrymandering that was happening on my campus when I was a freshman. Seeing how the student organizers in that moment moved and galvanized around that issue. Community members came in. The Beloved Community Center was heavily involved. That’s what turned me on. I cared before that, but I didn’t know what I was doing.

And now let’s take it all the way back. Whose wisdom do you carry with you in this work?

Kylah: I would say my grandparents. Even though I wouldn’t consider them to have radical politics, when I got involved in organizing, I recognized that we’re all rooted in the same thing—the ways we take care of ourselves and those we love. That’s how they lived. Also Black queer organizeers throughout history, especially youth organizers in North Carolina. Too many to name names.

Mya: My grandparents. One of my grandfathers in particular—the last thing he told me before he passed was “head up, and lead well.” That’s stuck with me in all my leadership positions. There’s also the famous quote from Gil Scott-Heron, “the revolution will not be televised.” To me, that means, it starts with you first—you are the change you want to see in the community. Leading the way you want to be led. Also after watching Judas and the Black Messiah— understanding that he was only 21 years old, that kind of stuck some fire under my ass.

Kylah: The ability to bring nuance. Seeing multiple sides of things and finding new ways to do things through said nuance. I’d be “Multi-Guy.” I’m nonbinary, but because I am still often perceived as feminine I like to use gender normative words like “guy” outside their traditional usage.

Mya: Being able to relate and appeal just about anybody when it comes to our youth. You could call me “The Ally.”

Mya: I’m a Cancer. Cancers are loving. I’m somebody who loves everybody, no matter where you come from. I see the heart first. One of our values with NoCap is meeting people where they are. That’s something I’m naturally able to do.

Kylah: I am a Gemini. I think that plays into my ability to see multiple perspectives and incorporate nuance into my organizing.

Song you got on repeat right now?

Kylah: My own song, “When the Rain Is Cold”! You can stream it on SoundCloud.

Ok finally, the question we all came for. Mya, you went to Central. Kylah, you went to A&T. Why is your school #1?

Mya: 1. It’s an underdog. We’re different from a trendsetter. 2. We’re the first HBCU to have our own LGBTQ center on campus. 3. We’re one of a kind. We’re in a college town and a college state. We make the best of what we do with what you have. 4. Our model is suits and service. That goes a long way. We build and breathe community leaders like myself. If I do say so myself.

Kylah: My university is the best HBCU in the state. In the nation. Also the largest. And #1 just period. Because of our students. (The administration is a different thing…) Our commitment to our community and to the Black community in NC is unmatched.