Black SEL Matters: An interview with one of SVA’s newest sponsored projects 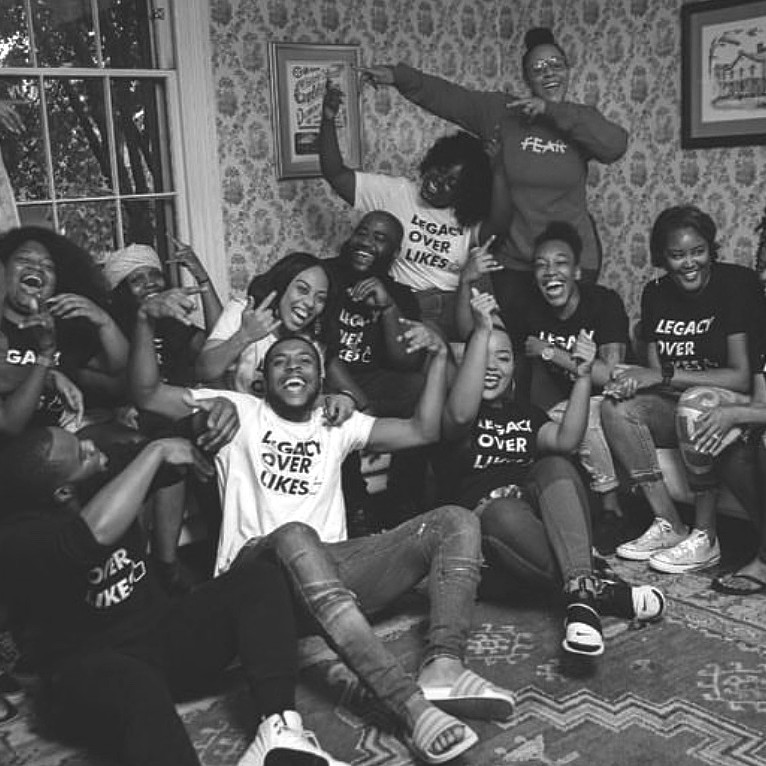 In 2021, we welcomed Dangers of the Mind (DOM) into our family of fiscally sponsored projects here at SVA. DOM joins a network of 22 such projects, each of which is advancing long-term, community-based visions for liberation.

DOM was founded in 2015 as an “educational movement empowering the next generation of leaders by helping people overcome negative thought patterns to build healthy minds.” In September, DOM hosted its inaugural “Black SEL Matters” summit, bringing together SEL and mental health specialists, students, educators, influencers, and community leaders. On February, DOM will be launching the Black SEL Hub, with free resources, webinars, and blogs to help Black people sustain SEL in their homes and communities. 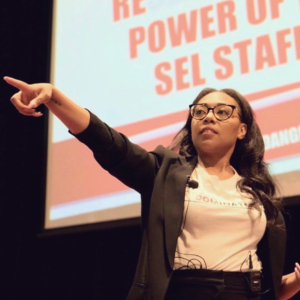 We sat down with Kristen Hopkins, DOM founder, to break down the story of DOM, her work combating the school-to-prison pipeline and her visions for liberatory education.

One of DOM’s core messages is “Black SEL Matters.” What does this mean for you?

There are skills and competencies that we can engage to make responsible decisions and build healthy relationships. SEL is about communicating, being socially engaged, making sure that we’re respecting others. These things aren’t always common sense—especially in the context of fighting and surviving.

Our goal is for Black people to understand that SEL is critical in our communities—to heal from trauma, to know that we can be disciplined, to achieve more, to face adversity, and to win. We’ve been doing this all our lives. I call us ReSELient™—we already have these skills. Our goal is to bring awareness to them and sustain them.

What does Black SEL Matters look like in the context of DOM’s work?

We’re pushing Black SEL providers into urban districts. The disconnect is that people are going to districts and providing SEL programs, but these programs aren’t necessarily culturally responsive and affirming. We want to make sure that our resources are reaching Black and brown kids. We support providers with a curriculum that focuses on the skills, attitudes, and knowledge that allow us to develop healthy identities, manage our emotions, and reach collective and personal goals.

Can you share a little bit about the history of Black SEL?

When we say Black SEL Matters, we’re making sure that we acknowledge the people that came before us. Dr. James Comer, MD, MPH is a Black psychiatrist who helped found SEL in the 1970s at Yale University. It’s important for us to highlight the Black voices in the SEL space—not just Dr. Comer who paved the way, but all those involved in this work.

We also acknowledge the ways that SEL competencies have been present in Black communities before the designation of SEL as a field. We honor and model the lives of the likes of Rosa Parks, MLK, Malcolm X, John Coltrane—all these folks have displayed SEL skills through their every action. They knew how to empathize, how to perspective-take, how to gather folks together, how to regulate emotions and fight strategically. They displayed all these skills. It’s really about us going back to our folks who paved the way and honoring their lives.

DOM was founded in 2015. Take us through the story of what brought you to this work.

I grew up in Windsor, Connecticut, and moved to Atlanta at the tender age of 22. I lived in Buckhead in a beautiful condo with a rooftop and pool. I was partying every night. I was an entrepreneur and I loved on my own terms. I wasn’t practicing SEL skills because I didn’t know what they were. I wasn’t taught them in school. Then I had a series of moments that jarred me from the life I had taken for granted.

First, I was coming home from a club in 2014 with my friends. They dropped me at my car. I had been drinking. I started driving and saw a huge puddle of water and I braked. My car spun around seven times, and I smacked into a pole. My car was wrapped around the pole. When I opened my eyes, a taxi driver was pulling me out my car. People were standing on the side of the road while he yelled “she’s alive!”

The second thing: I was in my house getting ready for my friend’s cookout. I heard water. I saw water pouring out of my light fixture. It was flowing out of my wall in the bathroom and out of the vents of my kitchen. My condo flooded. Someone had busted the vanity upstairs, which came down to my unit.

Then my computer crashed. It got fried. I called my parents and told them that I needed to stay with them for 6 months. I felt like a huge failure and was depressed. My family knew me as a strong woman, an entrepreneur. As soon as I walked into my parent’s house, I heard a voice in my head, saying “Dangers of the Mind.”

I knew that the season of my life was going to be a hard season. I felt like this failure. I walked up to my mom’s office. I grabbed a red pen, the only one I could find. The next day I opened my mother’s laptop and started writing. I was crying. I felt the weight of my writing. God had just come in and started writing for me. When I read it back, it was every single attack that had shifted my progress. I was talking about fear, brokenness, insecurities, perceptions, complacency—all the things that were at odds with what I saw as the best version of myself.

After that, I finished my book in 3 months. I got an editor and graphic designer and took a self-publishing course. Once I put it out, I was called in to speak to 800 students at the Washington Center. From there I started speaking to schools, universities, and alternative schools.

And then you translated these lessons into a district-wide curriculum.

I felt like something was missing. I was motivating kids and then walking away. I got a phone call from a friend, who told me my entire book was Social-Emotional Learning. My long-time educator aunt then confirmed with me that I need to develop a curriculum. I started reading books, researching models, understanding what SEL is. I developed a curriculum within a matter of 7 months.

Then I went into one of the worst alternative schools at the time in Washington, DC. I wanted to see it work for myself. The first year I taught it, I took 50 students who were struggling. The principal said I believe what you’re doing. I worked with those kids and saw dramatic changes.

In 2017, the district came down and picked us up for all the alternative schools and juvenile justice center. I started speaking at national education conferences. That’s when I realized our niche with alternative education. At these alternative schools, folks are labeled “bad” or “high risk.” One of the things that we really focus on is shifting the narrative from “high risk” to “high promise.” This child is not “bad” because they’ve made a wrong decision. We believe they can take our program and be equipped to go on and prosper in their lives.

In K-12 education, youth and educators across the country talk about the school-to-prison pipeline, the system of policies and practices that push kids, especially Black and brown kids, into the criminal legal system. How does your work address this system?

I consider myself a disruptor of the school-to-prison pipeline. My work is pulling folks out of the juvenile justice system and alternative environments and putting them back into schools. The pipeline starts in in-school suspension (ISS).

In 2017, I created an intervention kit for ISS. There was a gap and a need for transient populations. Kids would put their heads down and hoodies on. But their names were still being checked off as data. These same kids are coming back to ISS.

One of my kids was shot 4 times at the age of 14. Another was addicted to K2, a synthetic weed drug. Kids were dealing with so much trauma. With the intervention, they were doing rap songs, skits about fear, helping them learn new patterns. Part of this curriculum is personal. I’ve realized I’m right-brained. Recently, at the age of 34, I found out I had ADHD. In a way, I’ve been creating resources for kids like me this whole time.

Your story has had a huge influence on your work. How do you relate your ongoing work to the identities that you hold?

Through this work, I’ve realized this is who I am as an African-American woman. Now that I’m whole. Now that I know what I’m supposed to do on this earth. There’s a social responsibility tied to what I’m  doing. I tell myself, Kristen, your work is for the world.

As I’ve done my work with alternative schools, I’ve realized how horrible policies are. We have to mandate our staff to know SEL and model it in their life before they bring it to children. I saw this huge need for new models, new policies, new guidelines. I’ve gotten to a place where I’m really bold about our work—calling out systems, working to change things. Fighting for what’s right. That’s where I’ve grown as an African-American woman.

One more story: When I first thought about Black SEL Matters, I was running at 6 AM. I saw this white guy, who looked at me like, “I don’t know you.” I hadn’t texted anyone that I was running. The next block I broke down crying. I prayed and said, what can I do for African-American people that will help them on a social-emotional level. I didn’t realize I was traumatized by Ahmaud Arbery. What if this person hurt me? This person didn’t know my dreams. They wouldn’t know anything about me. Not just me—our children are in a traumatized state and are kind of numb. I want to push my culture and my people forward.

What most excites you about joining SVA’s network of sponsored projects and frontline partners?

I feel really empowered to be around people who are grounded and rooted in movement. There’s no better feeling. I’ve had folks in different spaces who are part of that. But to have folks who are all rooted is very important to me. Just the energy—you can tell the difference. When someone is grounded and passionate and not letting up. One of the things I used to fear is that people would steal what I do, but when I’m around folks who are grounded in what they do, it’s different. To be around folks who are really, really pushing initiatives on the grassroots level. This is what inspires me—working with people who are doing the same.