Participants at Black Workers for Justice’s 40th Birthday Celebration in Raleigh, NC on May 21, 2022

Southern Vision Alliance is honored to partner with Black Workers for Justice in different campaigns. SVA hosted BWFJ Freedom Fighters Shafeah M’Balia and Ajamu Dillahunt for a webinar where they shared their perspectives on the Black Liberation Movement, internationalism, freedom of political prisoners, and other social justice movements (see video HERE).

Black Workers for Justice (BWFJ) is an organization of Black workers formed in December of 1982 out of a struggle led by Black women workers at a K-Mart store in Rocky Mount, North Carolina against race and gender discrimination.

Since then, BWFJ has emerged as a leading organization in North Carolina to advance the Black Liberation Movement and worker rights movements. In the last 40 years, members of Black Workers for Justice have been involved in important campaigns including justice for Hamlet Poultry Plant Fire, the launch of the North Carolina Public Workers Union (UE Local 150), the establishment of the North Carolina Environmental Justice Network, the establishment of Fertile Ground Food Co-op in Raleigh, founding US South-wide Southern Workers Assembly, the launch of Refund Raleigh, and other organizations and movements.

Following the Black Radical Tradition, Black Workers for Justice has made connections between local to global liberation movements. Members of Black Workers for Justice were involved in the anti-apartheid movement in South Africa and worked with Durham City Council to pass a resolution against apartheid. BWFJ members have visited Cuba and supported the work of IFCO/Pastors for Peace. They have also made connections between the Black Liberation Movement and Palestine Freedom Movement. BWFJ Annual Banquets express solidarity with Cuba, Venezuela, Palestine, and other global liberation movements. 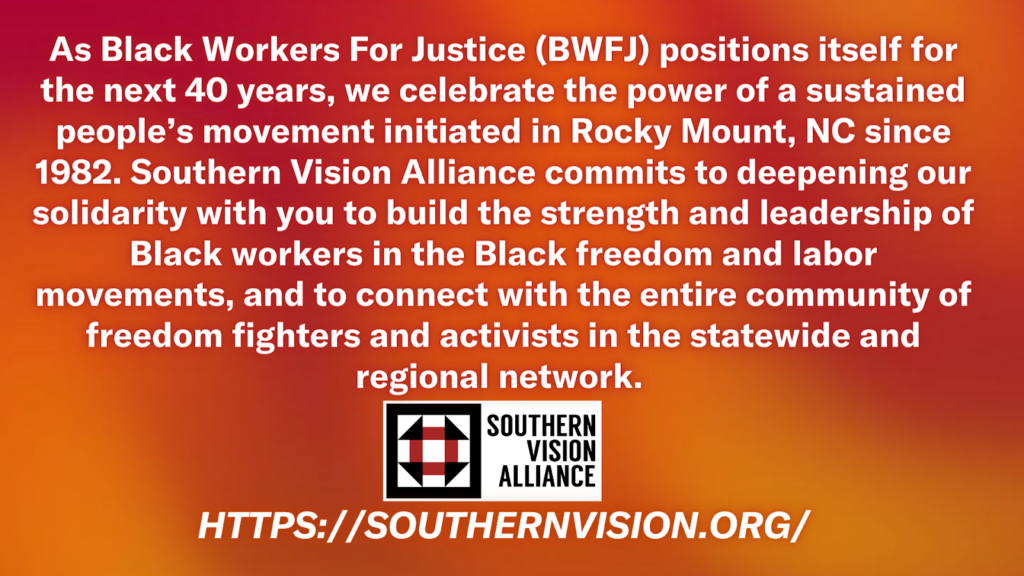