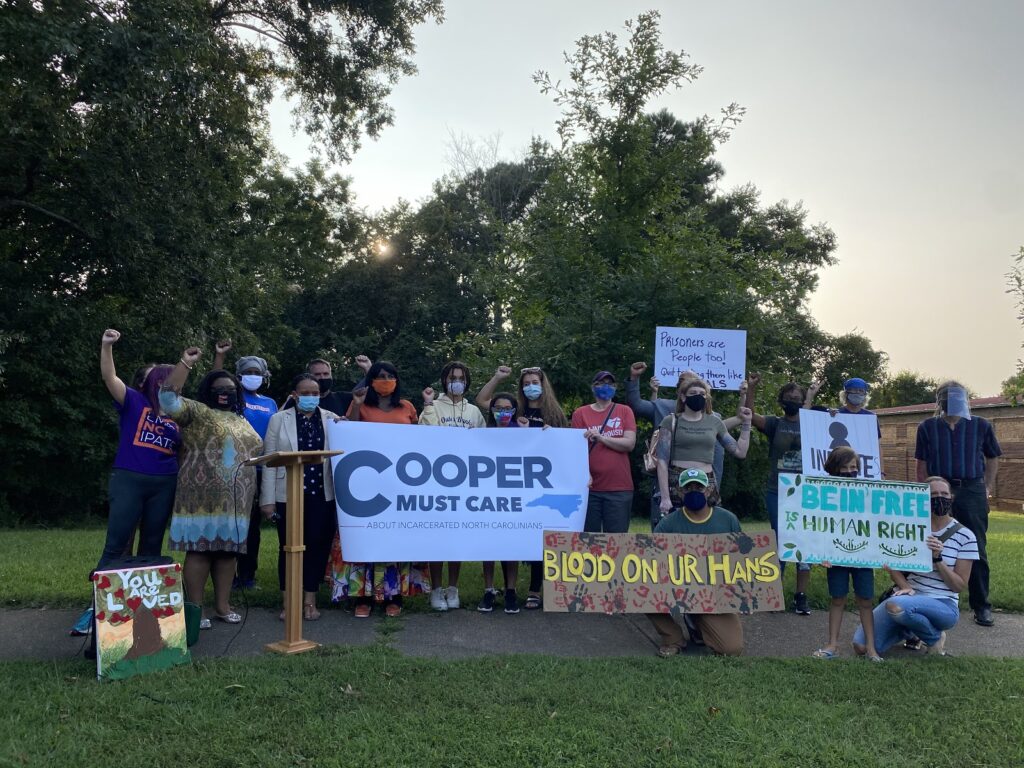 Advocates, family members, and organizers gather at a rally on Tuesday, Sept. 15 to call for the release of people incarcerated who are at risk of COVID-19.

COVID-19 has spread rampantly through North Carolina’s state prisons, leaving thousands of incarcerated people infected and 12 dead. Still, NC Governor Roy Cooper has not commuted a single sentence during his 4-year term, and more than 2,000 who’ve completed their sentences and are parole-eligible are still awaiting release.

As of Wednesday afternoon a total of 2,579 people incarcerated in NC’s prisons have tested positive for COVID-19 out of 33,975 tested, according to data from NC DPS.

On September 15, family members, organizers, and advocates rallied at the NC Correctional Institute for Women in Raleigh under the banner of #CooperMustCare. They demanded that Cooper and Secretary of Public Safety Erik Hooks commute the sentences of all incarcerated people at risk of COVID-19.

The rally was coordinated by Emancipate NC, a grassroots organization working in the state to end mass incarceration and structural racism.

After the action, we interviewed emancipation advocates and family members who came out to fight for the rightful release of their relatives.

Amanda Marriner spoke at the rally to advocate for the release of her wife, Sandra Dowell, who has underlying health issues that make her at risk of severe complications if she contracted COVID-19. “I and she specifically are really scared that if she catches it, she will die,” she said. Her wife Sandra has been eligible for parole for 15 years, and has been incarcerated since 1993. Their friend Faye Brown died of COVID-19 at the Raleigh Correctional Institute for Women in May. “I just don’t see why, with someone who could be released who has done their time, why would you choose to keep them in there where they could die?”

Amanda Roys drove two hours to fight for the release of her fiancé, Kenneth Graham Stanley, who is incarcerated in Troy, NC. Kenneth has been incarcerated for 12 years and has served 80% of his sentence. “He is a low risk offender, he has scored low risk, he has learned his lesson, but he is still being forced to have his life at risk being incarcerated,” Amanda said.

Amanda’s daughter Ava, who is 12 years old, felt the courage to speak at the rally on behalf of her stepdad. The rally was both of their first times protesting. “Some people may have committed crimes in the past and have gotten an unfair sentence. We’re trying to bring awareness to those cases and see if we can help,” Ava said.

Cierra Lindsey spoke at the rally to fight for the release of her husband, who is diabetic and has high blood pressure. “I’m just concerned that he might possibly catch it, and it could be a death sentence for him,” Cierra said. Due to the nature of the charge he was given he is not eligible for compassionate release or the Extended Limits of Confinement program. “They deserve a second chance, they deserve to be with their families.”

Rev. Chalice Overy, Associate Pastor at Pullen Memorial Baptist Church, spoke out at the rally against the injustices occurring within North Carolina’s prison system. She discussed the inhumane nature of the conditions within prisons and how incarceration is not the right solution for public safety. “Our community is everybody, right. And if we start defining those parameters that lead people out, this is how we can be content with inhumane standards for certain people.”

Advocates with Emancipate NC have been compiling video testimonies from the families of those incarcerated at freethemnc.org/. Portions of the speeches given at the event can be found below.