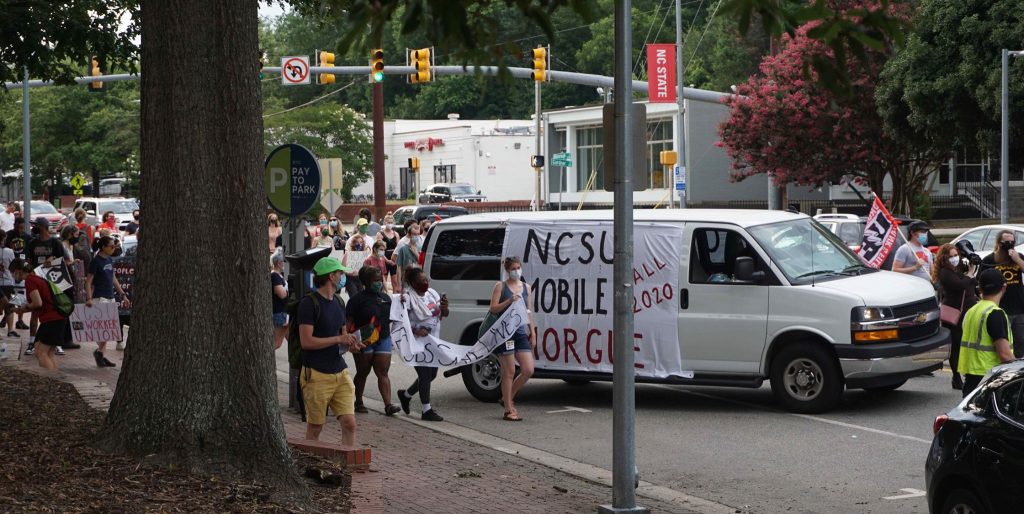 On Juneteenth, public sector workers from UE Local 150 joined rolling protests in Durham, NC, with a “Workers Rally for Black Lives.” The workers, who’ve long advocated for investment in public services, challenged Durham City Council on its priorities; on June 15, the Council voted to increase the city’s police budget by 5% while simultaneously canceling scheduled wage increases for city workers who’ve been risking their lives under COVID-19.

We spoke with worker activist Donald Quick about what public workers are going through in this moment. Quick is the financial secretary for the Durham City Workers Union Chapter of UE Local 150. By day, he drives a service truck for Durham city’s street maintenance department and works on water, sewage, and mainline breaks.

We’ve edited the interview for length.

Southern Vision Alliance: Tell us about UE Local 150 and the workforce you’re a part of.

Donald Quick: UE Local 150 has been around for a while. We cater to those who are going through bad situations on the job. Also, we are an organization that believes in fighting corporate America and the greed that they’re trying to shove down our throats. We let people know that we are there for them. We will fight with them, we will stand for them, with whatever issues they’ve got going on.

UE currently represents city workers in 8 cities across NC, in departments including sanitation, water, parks and recreation, streets, and public transit. We also represent state mental health workers in the Department of Health and Human services, residential developmental centers, and psychiatric hospitals across the state. Additionally we represent essential workers in the UNC System like housekeepers, groundskeepers, grad workers, and food service workers. Lastly, we organize workers at the Cummins Diesel Engine plant, too.

What’s your experience been as an essential worker and union member during the COVID-19 pandemic?

The union has come together and fought for safety for workers. We have let the city know that we will not stand around and tolerate the lies that they’ve told us. They told us a lot of things that they were going to do for us, and nothing has gotten done.

We found out that people that worked with us had COVID-19. All they told us was that they were going to spray the building down and this, that and the other. None of that matters when we find out that we’ve been working in the same building as people that’ve had it. We were supposed to have plexiglass put in our trucks a couple months ago; that has not happened. Then they say two people to a truck. This is unprofessional all the way around.

What are your demands for the city right now?

We were supposed to get the 5% annual Step Pay increase, that’s one thing we want back. They took that away from us. Additionally, we need hazard pay. We’re working in a hazardous environment—we should get paid for that. They don’t think we need it but we know we need it. We’re the only department that really puts ourselves out there when the weather gets bad or when the disasters come.

Also, every truck needs masks. We need plexiglass to be put into trucks. I don’t know why it’s taken forever to do this.

The people that work in City Hall, they’re at home. But us essential workers, we’re out in the field. And they get paid just like we get paid. Is our safety worth anything to y’all?

And then, after risking your lives under COVID-19, the City Council increased the police department budget while eliminating your scheduled wage increases.

That’s right. We are fighting for our 5% wage increase. We were getting at least 2%, and they don’t even want to give that to us now. They’re giving all this money to the police, but look at what the police are doing. Look how they’re killing people for no reason, look how they’re disrespecting people. There’s got to be a change in the way they do things.

They talk about how the police are putting their lives on the line, but hey, we’re putting our lives on the line too. We’re driving these big trucks and they’ve got salt and sand on them and it’s slippery and wet outside. We’re the ones that are out here in the streets when the snow comes, when the weather’s bad, when a disaster comes. We’re the ones that get out there and keep this city straight. They prioritize the police because they feel like people want to be protected. The essential workers want to be protected, too.

We’re just tired of it. We have got to fight. We’ve got new members coming in and we’re going to address more matters.

Is there anything else you’d like for us to know about UE Local 150 and the organizing you’re doing?

UE 150 is an organization that believes in standing up for the working rights of the people. We are not here to beat anybody down, we’re here to speak our peace, to let people know that we’re not going anywhere.

We also want people to know that when we join together and fight this thing, we can win. The injustice they keep trying to shove down our throats, we know it’s not right. So what do we do, we fight back. We want to get compensated for the work that we do.

All I’ve seen in the years I’ve worked for the city is how they’ve taken from us. I’ve seen a lot of taking but I haven’t seen any giving. I want people to know that we’re not scared to fight. If they want to fight with us, they are welcome to join, and we’ll fight them together.