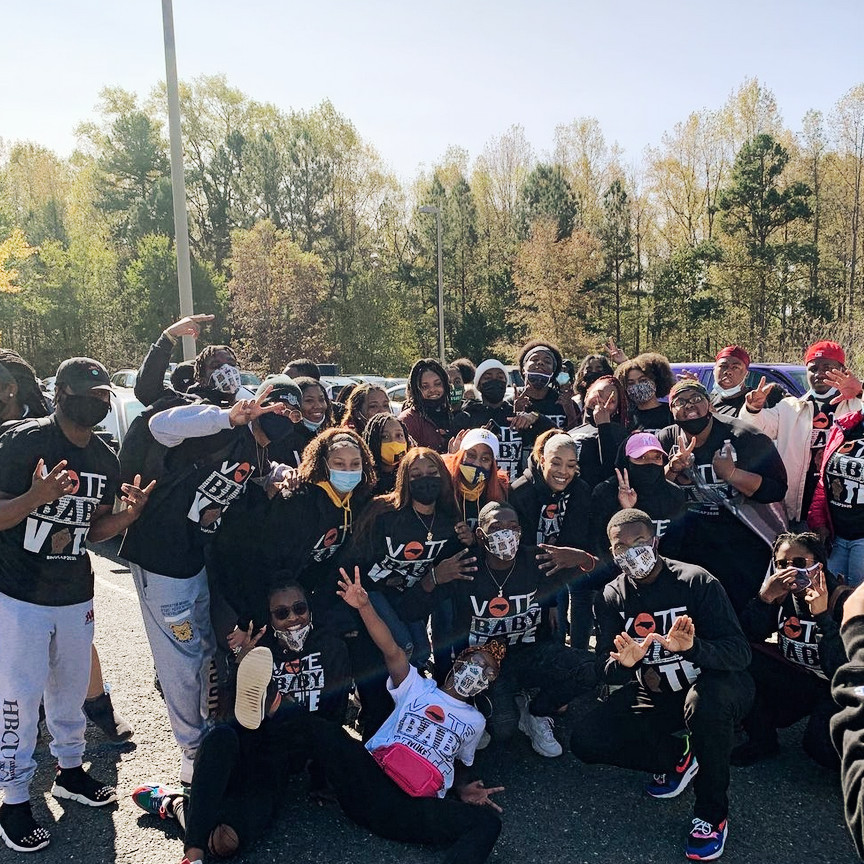 Voters under 40 are now 40% of North Carolina’s electorate—and the most racially diverse bloc. Enter: NoCap, a region-wide, youth-led organization working to get young voters organized and advance new visions for justice.

In 2020, NoCap built a fellowship team of students representing schools across the Triangle and Triad. In November, the fellows hopped on the “Vote Baby Vote” bus to Charlotte to partner with chart-topping artist and Charlotte native DaBaby, collaborating on canvassing, poll parties, and more. DaBaby featured the collaboration on his music video for “Gucci Peacoat,” which has gotten 7 million views. In January, the fellows took another trip, this time to Atlanta to partner with local, Black-led organizations to get out the vote for Georgia’s historic runoff elections.

This year, NoCap plans to go even bigger, building a base of more than 100 fellows. The crew will work to build civic engagement campaigns getting out the vote for municipal and state elections, host a comprehensive COVID-19 outreach program, create a cohort of local artists producing content that engages audiences to join the movement, and take action around racial and economic justice issues.

Check out the stories of these five NoCap fellows to find out why they organize and what they’re planning for the future. 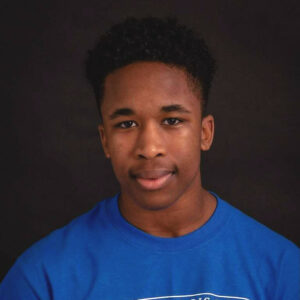 Israfil Brandon’s proudest moment as a NoCap fellow came in Charlotte, NC, at the last poll of the day of Election Day 2020. He and the team had prepared for months, with hundreds of hours of logistics, work on the ground, and canvassing going into it to get people out to vote. He ran point on transportation for the day, not only getting the dozens of NoCap fellows and student volunteers on a bus from the Triangle to Charlotte, but also making sure the students arrived at the five poll parties NoCap was hosting. He was additionally responsible for a number of communications tasks—recording audio, interviewing people, being the NoCap spokesperson in interviews with large publications, Twitter posting, social media promotion—doing what needed to be done on the ground to get the word out.

But the long, exhaustive day, the hours and hours of work and preparation, it all came to fruition for Brandon at the very last poll site they canvassed, as hundreds of people from the Charlotte community showed up to vote. “To see that many Black people at one place and to know that I had a hand in bringing them all there—It brought joy to me,” he said. Brandon emphasized that NoCap’s mission is not just to turn out Black voters, but also to center the stories of young people. “I’m glad they’ve created a space to facilitate that and opened the door for young people to come in and build those relationships in our community.”

Brandon is additionally passionate about food scarcity and food deserts. There’s a community pantry initiative starting at his university, NC A&T, that he’s excited to get involved with. “It takes a million raindrops to create a thunderstorm, so you’ve gotta just do your little piece,” he said. “Even if it is just reposting or giving them $5 so they can buy a refrigerator. I don’t see it so much as I have to carry the burden of some huge action but rather you’re building something with other people, which is the goal.”

In 2021, Brandon is looking to get more involved with writing and content creation in his organizing work with NoCap. During his time canvassing in Atlanta for the Georgia runoff elections, he connected with Black Men Build and became inspired by their quarterly magazine, Wartime. “Wartime is part a handbook of useful information and part a record of their impact in the movement that they’re working to create in Georgia,” he said. “Having something like that, even on a small scale at NoCap, is something that I want to work towards.” 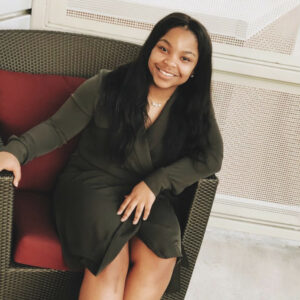 When talking to other NoCap fellows about the reasons why they became involved with the fellowship, Mya Bass’ name came up frequently. As the lead fellow coordinator with NoCap, this knack for basebuilding is part of her job. Her responsibilities in this role include delegating jobs to fellows, coordinating meetings and Zoom calls, recruiting new folks, and communicating with fellows to help strengthen their collective organizing.

Throughout her work, she’s focused on supporting youth to be the change they want to see in their communities. “We support and take care of the youth first because they are our future. That is my aim when it comes to community work—trying to organize, find support, build, create resources for those who lack,” she said. Bass became involved in NoCap after Jonah Vincent, Director of the fellowship, came to speak at one of her classes at NC Central University. Since then, she’s tried to take in as much information as she can. “Community and understanding the importance of our political power and our civic duty, especially when it comes to voting, that’s why I became involved.”

In preparing for the general elections, the NoCap team hosted events to get the word out about registering to vote. Bass’ most inspiring moment with NoCap came at one of these events at a Durham public housing community. The team had brought out a food truck to feed the residents and were spreading information about food access, community safety, and voting. “We asked them what we can do to make their communities safer, or what they are looking for from their community to change their environment,” she said. “That was a pretty eye opening time for me, looking to hear directly from the core of our community.”

In her organizing work in 2021 she’s looking forward to working with NoCap to create more resources for at-risk youth. “Giving the children, the youth something to do, especially as it relates to their education—that is my focus,” she said. “I’m looking forward to bringing a lot of those things to the frontline.” 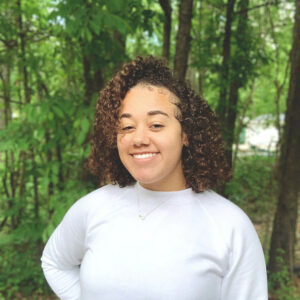 Alexis Harp’s philosophy in organizing is to meet people where they are and not where she might expect them to be. While NoCap has organized its student fellows for various causes, Harp worded their collective mission very simply: strictly uplifting their surrounding communities. “Between feeding the community, registering people to vote on and off campus, creating events, canvassing, it was just all around a time for us to lift up one another,” she said.

One of Harp’s proudest moments in organizing with the fellowship was the experience of registering her own mother to vote and getting her out to vote for the first time. She was also inspired by a particular NoCap event where they worked to feed the community of Oxford Manor in Durham. “Being from Durham, it was great to do work in the communities that are sometimes overlooked,” she said.

Harp said it’s always been a goal of hers to continuously give back to the community in whatever capacities she can. “NoCap has allowed me to sit in so many rooms that I probably would have never been in without the guidance of support staff like Jonah, Bryon, Josh, or Joe. I have been able to bounce ideas off of and speak to so many likeminded people,” she said.

In 2021, Harp is looking to organize around voter rights education, feeding communities, and community cleanups, and wants to expand NoCap’s social media outreach. “I am just truly thankful to be able to sit in this moment and soak it all up,” she said. “I just can’t wait to continue this.” 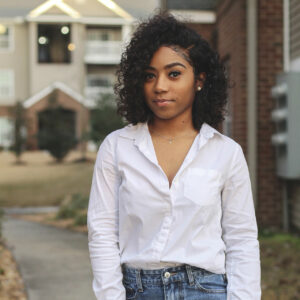 Of all the work Jada Anthony’s done with NoCap, her canvassing work for the runoff elections in Georgia makes her the most proud. The NoCap team traveled to Atlanta in January to partner with other grassroots organizations and get out the vote for the special election. Anthony helped pass out flyers, knocked on doors, and helped NoCap fellows host popup events to get people out to the polls. Seeing the results of that effort—the amount of people that voted and how her own work impacted the elections overall—was a surreal experience for her. “It’s so crazy because when you’re in it, and you’re doing it, it just feels like you’re working and you’re trying to do your best,” she said. “But once you see full results and step back to take that moment you’re like, wow, I really helped do that.”

Anthony is a Lead Fellow with NoCap, and oversees other fellows under her purview. She also helps manage the NoCap social media, where she makes sure that their accounts are updated with information about what the fellows are doing on the ground. One of the things that attracted her to the fellowship was how the program focuses on the betterment of other people. “I’ve been blessed with a lot of opportunities and finances. I can use that to help other people, whether that be starting community centers, feeding the homeless—anything that can be an asset to someone else, that’s what I want to do,” she said.

In 2021, she’s hoping to use the NoCap platform to get more people her age involved in their communities. “We are the future,” she said. “If we start doing the groundwork now, hopefully by the time we’re in our 30s and 40s it would have made an impact, and a lasting one.” 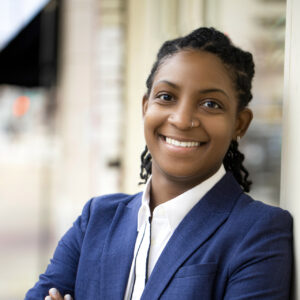 When Tamara, “Tap,” Bates thinks back on her work with NoCap, the words that come to mind are “boots on the ground.” Despite hard deadlines and limited resources, Bates and the team were able to mobilize fast and follow their plans through to get out the vote in the 2020 elections. During the Georgia runoff elections in January, Bates worked with NoCap fellows in collaboration with other grassroots organizations to provide help in moving people to the polls, and to educate folks on the importance of civic engagement and what it means to stand up for your community. At the time they also collaborated with churches in the area in “Souls to the Polls” events, by mobilizing church members to hand out food and engage people at polling sites. “A lot of our leads and opportunities came from people who live in the community. So it took connecting and working alongside them,” she said.

Bates has been involved in organizing since 2012, when she helped get more young people involved in the reelection of her mentor to his State House seat. She started going to the Capitol every day to notetake, to be involved in the day-to-day activities, and to learn about the ways young people can play a role in the political space. “At the time, there weren’t a lot of young people there,” she said. “The ‘young people’ were in their 40’s. I took it upon myself and wanted to learn more. And never stopped.”

In 2021 Bates is relocating to Nashville to take on a position as director of political affairs for the Tennessee Democratic Party. “I’m excited about just being able to build, and ready for more connections and more opportunities to train candidates and encourage people to know more about local politics,” she said.