Our Southern Vision, Toward 2025 and Beyond

In 2009, North Carolina held off-year, local elections. With only 5% of voters turning out, Art Pope, a millionaire backer of small government and anti-migrant think tanks, financed a slate of candidates to take over the Wake County school board.

The board’s new, 5-4 majority sought to ram through proposals to reverse decades of civil rights wins—including gutting the district’s diversity policy, which was designed to reduce resource gaps between “rich schools” and “poor schools.”

On the afternoon of June 16, 2010, over 200 students took things into their own hands. They sat in at the board to stop the racist re-segregation effort in its tracks. In the weeks that followed, they went on to file a Title VI complaint with the Office of Civil Rights at the US Department of Justice.

And then, they won. 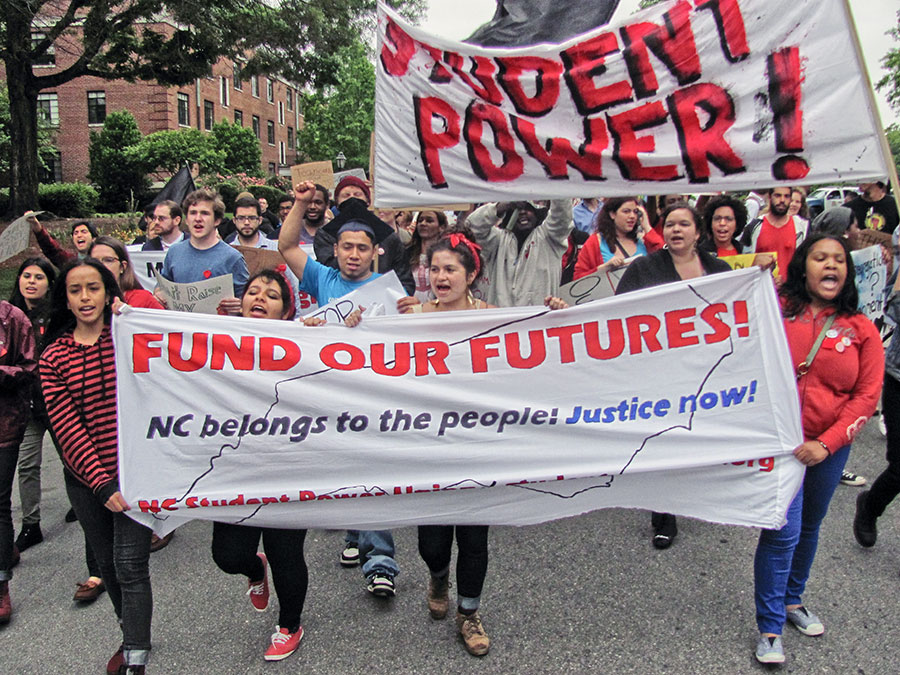 Photo by Dante Strobino: Students marching with signs reading “FUND OUR FUTURES!” AND “STUDENT POWER!” On May 1, 2013, students marched on the NC General Assembly, helping catapult the Moral Monday movement into national prominence. The DSC provided back-end support— in the form of email blasts, space to paint banners, materials for signs, meeting spaces, and jail support for the student organizers.

Three years before “Moral Mondays” made headlines, this victory showed what we could do to combat North Carolina’s expression of the emerging Tea Party movement. It wouldn’t have been possible without the support of the Durham Solidarity Center, the DSC.

The DSC was founded that same year. It was housed at the Hayti Heritage Center, a historic Black cultural institution straight down I-40 from Wake County. It served as a meeting space and resource hub for grassroots movement building. That spring, it provided youth organizers with room to meet, button-makers, bullhorns, a podium, banner-making materials, and more.

By 2014, the DSC had become a go-to resource. That August, young Black organizers reached out to the DSC for support after 18-year old Mike Brown was fatally shot by Ferguson, Missouri, policeman Darren Wilson.

Within two days, amid fear, anger, and trauma, they rallied more than 400 people at the Old Durham courthouse—the site that three years later saw the righteous toppling of a Confederate Statue.

A new organization formed: Black International Solidarity (IS). Though short-lived, Black IS’ young leaders played decisive roles in the Movement for Black Lives in the Triangle and across the country in the years that followed.

For a generation, August 2014 defined what’s at stake for our movement. In North Carolina, it underscored the basic infrastructure that movements need to respond—while sustaining our people for the long haul. 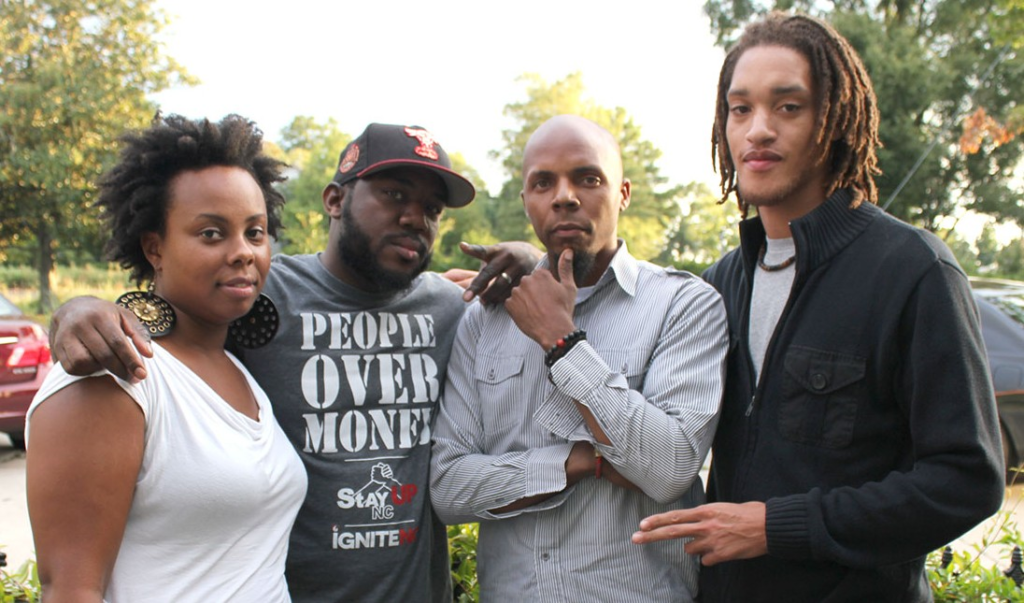 Photo from Durham Voice: Leaders from Black IS

In the throes of that moment, the Southern Vision Alliance, SVA, was born. A group of leaders from the DSC had undertaken a six-month, statewide listening tour where we continually heard the need for “movement infrastructure”; Mike Brown’s murder was a ringing reminder.

“We needed rooms to hold physical space. We needed bull horns, amps, and flipchart paper. We needed networking, relationship-building, and space to build solidarity. We needed ways to share information so we know who to call, for what, when it was most urgent,” said Joshua Vincent, a Black IS founder and now Co-Chair of SVA’s Board.

Since its founding, SVA has worked to be a “grassroots intermediary” that helps to generate resources and build capacity for grassroots, low- or no-budget efforts. In 2019, we came full circle: SVA became the fiscal sponsor and steward of the DSC, which had run into financial and managerial challenges as a volunteer-run operation. This year, SVA is re-launching the DSC with a new facility, operations, and staffing.

As crisis builds upon crisis, SVA enters a new phase of our work. We’re driven by the vision of the DSC—low-ego, multi-issue, multiracial, grassroots ecosystem-building—and the values of solidarity and resistance that have been the fabric of Southern resistance for centuries.

Meeting 2020—and beyond—where it’s at

If history were a pendulum, it’s swinging right in much of the world—but not without challenges from communities around the globe.

In the US South, the legacies of slavery, genocide, Jim Crow, and union busting live on. In resistance, there have been uprisings against police killings and symbols of white supremacy, thousands of teachers on strike in states where public sector collective bargaining and strikes are “illegal,” democratic communities being built and defended in the Deep South, and migrants and allies putting their bodies between ICE agents and the deportation machine.

As we prepared for 2020, the Southern Vision Alliance undertook a rigorous, yearlong strategic assessment process. We challenged ourselves to reflect on how our model has evolved and what this means for the next 5 years and beyond.

This winter, we produced SVA Toward 2025+Beyond. This document outlines our evolving strategic direction and provides the roadmap for our work through the 2020 elections to 2025 and beyond. We’ve regrounded our purpose: to grow infrastructure that can support frontline leaders and organizations to disrupt and transform power across the region.

In North Carolina, COVID-19 has exposed just how far our state has rolled back relief and safety net measures—Medicaid expansion, unemployment benefits, protections for workers, immigrants, and incarcerated people, and more.

To fight back, we’ve been challenged to go digital with almost everything we do. We’ve adapted: SVA is working with rural partners in Eastern NC to launch an online Disaster Survival & Resilience School. We’re co-hosting a National Day of Healing in June. We’ve helped convene and coordinate NC United for Survival & Beyond, a coalition of more than 200 organizations that, in just a month, has led two trending “Tweetstorms,” a car caravan to Senate President Phil Berger’s house in Rockingham County, and numerous banner drops.

As we adapt, we also know we can’t stay socially distanced forever. Our current rapid-response work builds on years of shared struggle. To keep building, we need in-person spaces like the DSC—physical homes for organizers to gather, take stock, get tools, and build power across identities, movements, and communities.

To address this gap, SVA is committed to build out “collaborative solidarity hubs” in new Southern geographies. These hubs will adapt the solidarity center model with new offerings rooted in community-specific needs.

When SVA launched in 2014, we housed two youth programs, Ignite NC and the Youth Organizing Institute (YOI), and served as fiscal sponsors for three emerging groups: the Education Justice Alliance, the NC Queer Youth Power Coalition, and the NC Coalition for Education Justice.

Since then, we’ve spent years building relationships with grassroots organizers. In the process, we’ve received continual asks to provide 501(c)3 fiscal sponsorship. Now, we sponsor 24 projects covering a diversity of issues, tactics, and geographies—from the Robeson County Cooperative for Sustainable Development to the Movement to End Racism and Islamophobia to the Community Alliance for Public Education.

At our best, we’ve supported grassroots, long-term base-building focused on campaigns to disrupt and transform power. As we build power for 2025 and beyond, we’re redoubling our focus on building connective tissue for this work.

In part, this means growing our Frontline Funds to support innovative new projects. In response to the COVID-19 crisis, we’ve launched a COVID-19 Community Rapid Response Fund to disperse $25,000 through grants of up to $500 each. We’ve also launched our first Migrant Solidarity Relief Fund, an initiative led by Comite de Accion Popular, our Wake County migrant justice partner.

Additionally, it means refocusing on how we know we can be most impactful. After months of assessment, we made the decision to put both our youth programs on pause. Both were created as entry points for young people to organize for power against powerful interests. At their peak, they’ve responded to movement moments, trained huge bases of leaders to fight against voter suppression, cops in schools, and education budget cuts, and birthed new, standalone projects, like Black University.

Together, these programs have helped shift power in the youth organizing landscape from “expert professional advocates” to directly impacted young people. Now, the sector has a wealth of youth fellowships and cohort programs, a model that North Carolina organizers helped to popularize. As with all our work, we’re assessing how best we can support and incubate innovative and nimble organizing to disrupt and transform power.

At the same time, we’re deepening support for our Sponsored Projects Program and identifying additional groups and initiatives that align with our values and theory of change.

In 2019, Joe Lewis joined our staff as a part-time assistant to our Co-EDs. At that time, a huge part of the EDs’ work was spent responding to sponsored projects’ needs and fulfilling our fiduciary duties. Now, Joe is the full-time Sponsored Projects Programs Coordinator. He’s joined by a growing team of operations staff, communications specialists, and trainers, who lend capacity to our grassroots partners to help them thrive.

Feeling the burn, igniting the South

For years, organizers in North and South Carolina have built relationships across state lines and supported each other’s economic and racial justice campaigns.

In 2015, members of YOI and Ignite NC mobilized support to Columbia for Niya Kenny, a student at Spring Valley High who was arrested for intervening in the violent discipline of another young, Black female student.

In the same year, Bree Newsome, who was the Ignite NC Western Field Organizer at the time, scaled the capitol flagpole in Columbia and took down the Confederate Flag. This kicked off a firestorm of creative individual and collective actions to tear down the sights and symbols of racism across the region.

Now, the implications for our work have become increasingly clear: We need a broader Southern strategy.

Starting with a focus on South Carolina in 2020, SVA is expanding our program to support organizing, exchanges, and place-based infrastructure across the South.

This year, we’re preparing to launch the Youth Power Fund of the Carolinas. We’re excited to deepen our support for organizing led by queer, trans, indigenous, Black, undocumented, and youth organizers on the frontlines.

This means hiring staff based in new geographies who can work closely and directly with sponsored projects. Above all, it means growing a model of scaled infrastructure that rests on humility, solidarity, and listening.

It’s this slower, intentional work, rooted in relationships, that our communities have always needed. In the current moment, this rings loud and clear. The COVID-19 disaster has exacerbated already-fragile systems of support and resources. It has exposed the disenfranchisement and underinvestment that our most vulnerable communities have faced for years.

Now, more than ever, it’s time to start building.