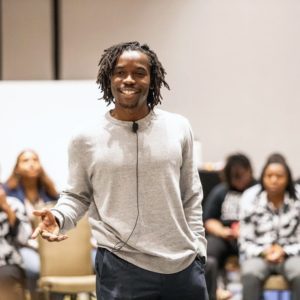 I am not afraid. I am however, terrifyingly aware of the danger that this election season means to my body and the bodies of my people, friends that go to sleep and wake up in the world as the targets of white racism, the fear of difference and the unmitigated onslaught of hate. Nevertheless, it is not an ultimately different danger than days before, it is rather obtuse, malformed and in the free range of real political consequence. Supreme Court appointments, Healthcare, violence, ignorance on issues like climate change, gender, women’s rights and social relations will have an affect on the American and international way of life.

More clearly said, I did not put my hope into this country nor my right to freedom in the hands of politicians. Freedom and being kind to each other is a daily struggle and resistance against all odds. To our children, the children I see — family or otherwise. To the precious black child — the elders, people needing help (don’t we all), the extremely vulnerable on the margins of popular concern, the unjustly prosecuted, and imprisoned, the words of Assata Shakur and others that know this danger more than others — and yes if you are wondering or have ever wondered if things fall apart, they certainly do — everyday. Be grateful for people that choose to fight for our freedom. These humans are not god and their idea of light is not our final salvation. Love yourz. Grateful that one day — years ago, I found God in the dark and that God still walks and talks with me.

It is our duty to fight for our freedom.

It is our duty to win.

We must love and protect/support each other.

We have nothing to lose but our chains.

Four years ago, I wrote the aforementioned words on the day after the national election that marked yet another watershed moment in the political history of the United States. A country that was boiling with racial strife resulting from the sequential public murders of Eric Garner, Michael Brown, Rekiya Boyd, Aiyanna Jones. Responses from epicenters of grassroots resistance in Ferguson, MO, in NYC, and in numerous cities across the country. Today, I write in the fall of a summer torn by a global pandemic that exacerbated the fracturing fault lines of systemic racism, structured poverty, and police and vigilante violence. The listed names of victims of police violence have exponentially grown, and sadly added new epitaphs. George Floyd, Breonna Taylor, Tony McDade, Marcus Deon Smith of Greensboro, NC, and the precious child Elijah McClain.

America’s scaffolds are off their bearings and this ship is fully unhinged from its mooring. The two Americas as critiqued by Dr. King is an urgent revelation,

“And I feel that we must always work with an effective, powerful weapon (non-violent resistance) and method that brings about tangible results. But it is not enough for me to stand before you tonight and condemn riots. It would be morally irresponsible for me to do that without, at the same time, condemning the contingent, intolerable conditions that exist in our society.”

Since 1968, the stakes have increased and the images in our collective rearview are closer than they appear. The potential danger elected on November 8, 2016 is now an entire government occupying leadership in the three branches of checks and balances. This would be considered fiction if not for the tell-tale marks of the reality. People I know have died when they should have lived and their deaths have been mocked by civic leaders who either commit abuses of power or do not do enough to stop them. Becoming a new person, a new set of values is the direction I believe in that can potentially create a new perspective. This new perspective of people centered politics is happening, it always has been in anti-colonial work, abolition, and ongoing successful revolutions.

We would be wise to receive this message from the grassroots. The message is visceral and clear, let us have ears to hear its seriousness. Organizations will be tested in their ability to promote ideas that exist outside of the economics of division, domination and political corruption. Individuals will be tested in their ability to grow authentic relationships based in the dignity and intrinsic value of all people. In the meantime, nature and animal alike, are in the hour noted by the second stanza of a “Warning” poem by Langston Hughes:

In the cotton fields,