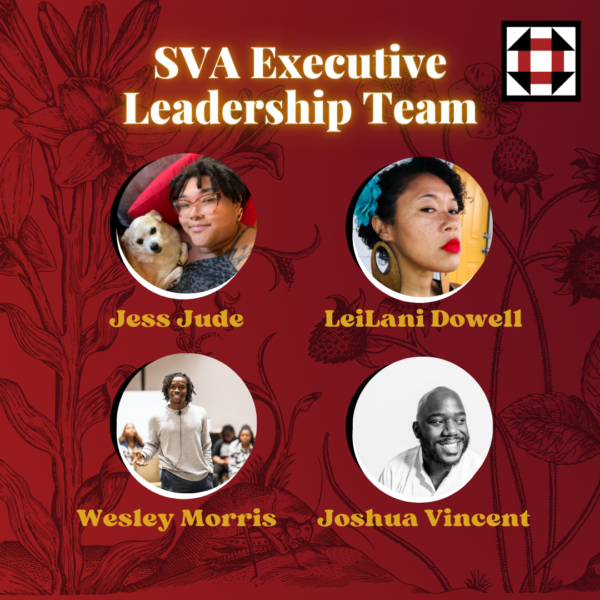 To achieve metamorphic, sustainable justice in the South, we at Southern Vision Alliance believe that those most impacted by systems of oppression and racism—such as Black women and youth of color, immigrants, the LGBTQIA community, the rural working class, and people living with mental or physical disabilities—need to be given the resources, agency, and respect to build communities through struggle and radically transform political power.

When confronted with uncertainty, chaos, fear, and mourning, we are forever inspired by and grateful for leaders who have dedicated their lives to fighting for intersectional justice and liberation for all. Our hard-fought movements would not be possible without those who have committed to being co-conspirators with the most alienated, marginalized, and/or colonized.

That is why we are proud to announce our new Executive “sQuad” leadership team, established as a result of profound internal growth in the last two years. Joshua Vincent transitioned into the role of executive director in February 2021, having previously served as Board Chair of SVA since its inception. Josh is excited to welcome Wesley Morris, LeiLani Dowell, and Jess Jude to the leadership team as associate directors!

This Black-led, Southern-raised team made up of experienced organizers, scholars, faith leaders, and cultural strategists is excited to develop and execute innovative programs to guide SVA to our north star: mass liberation for our people in the South! Our mission remains to provide resources, small grants, incubation, infrastructure, capacity building, and technical assistance to innovative frontline organizing projects, leadership programs, and collaborations that center directly impacted communities in the US South.

Get to know our new executive leadership team below: 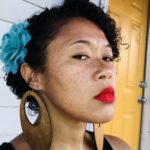 LeiLani is a queer Black femme that has traveled all across the nation and the globe as an activist, scholar, and former grassroots US Congressional candidate. Much of her early career was dedicated to supporting youth programs and student advocacy gatherings based in New York and in the global South.

In 2019, she received her Ph.D. in English from the City University of New York Graduate Center.  Her dissertation investigated U.S. logics of carcerality in relation to the sexualities of queer Black women by examining the case of the New Jersey Seven.

After having met the love of her life while doing jail solidarity for the folks who brought down a Confederate statue in August 2017, LeiLani has placed roots in Durham, NC, where she is excited to connect with new on-the-ground groups and find opportunities to continue learning. Speaking of tearing down racist memorials… check out our toppling racism map to see where more statues have fallen in the South!

When reflecting on Black radical traditions, LeiLani reminds us that it is one thing to learn history, “but how do we actually pay homage to the ones that struggled and sacrificed for us all? We must organize.” As we do, we must always pay reverence and respect to our ancestors that fought and died so our movement can progress. 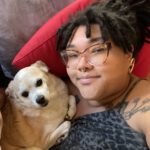 Jess is a southern queer Black femme who originally got involved in organizing because of their upbringing in the former capital of the confederacy and seeing first-hand the ways white supremacy still plagues the South. Since the Occupy movement, they have been a radical activist and good troublemaker with Project South, SONG, and many other organizations in North Carolina, Georgia, and Florida. Fun fact: Jess was arrested in 2016 outside Governor Cooper’s mansion protesting HB2 in solidarity with the LGBTQ community… this action ultimately inspired our Queer Mobilization Fund!

As a young undergraduate scholar, they used their knowledge of gender sexuality and women’s, Africana, and religious studies to facilitate impactful collaborative projects highlighting the intersection of race and power as it relates to abortion rights.

Jess is excited to see where our grassroots movements will take us. For example, as a former Starbucks employee herself, she can’t wait until the unionization wave hits their hometown of Richmond. They are also excited to see the ways in which the younger generation will take to the streets in the near future.

Black history and liberation are so important to Jess that they believe February should be called “black reflection month” because “there is so much that can be learned and unlearned from Black radical traditions and the ways they were resilient in their everyday struggles for revolution. Every February should be a battery recharge for our movement so we can have the energy to organize all year long!” 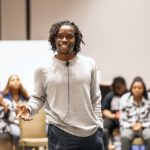 Wesley is a faith leader, organizer, and overall community member that is as kind as he is passionate about social justice and preserving the rich “forgotten” story of the South. Wesley is a Senior Pastor of an inclusive, multi-racial fellowship in Greensboro, NC, and worked with the Beloved Community Center, which led the effort to organize the nation’s first Community Truth and Reconciliation process and in early 2022 was our first site visit for the Black radical tradition learning series.

Wesley says that by having grown up in the South as a Black person they were organically introduced into ways of organizing in life and advocating for fair treatment. Wesley is a proud alumnus of North Carolina A&T State University and is thankful to be in a position to give back to the next generation by being a mentor and teacher through internship, volunteer, and coaching opportunities.

He is excited about SVA stirring a revolutionary imagination and catalyzing into and towards a new society. One that is more equitable and compassionate for this, last, and the next generation.

When asked about Black history month, Wesley says that every day we must meditate and remember that this is a time to not lose focus on the goals of the freedom movement. “Be creative in joining our history of resistance. Continue to focus on what freedom looks like when breaking new ground.” 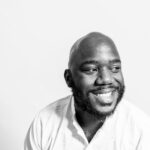 Josh is an accomplished activist, musician, cultural strategist, and scholar with two master’s degrees in music and history. He is passionately committed to illuminating and eliminating disparities rooted in culture, infrastructure, and policy with not just organizers and activists, but most importantly the everyday community member on the streets. Josh has been with SVA since its start in 2014.

He will never forget what he experienced when joining the #moralmonday movement in 2015 and seeing 11 of his comrades arrested for voicing their concerns against HB2. Since then, Josh has been an active organizer with student-based campaigns, labor unionization struggles, environmental justice disaster recovery programs, and the mobilization of Black youth in the most recent elections.