Funding the frontlines: A Southern strategy for freedom, justice, and human dignity 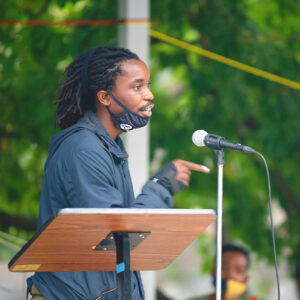 Wesley Morris speaking at a rally calling for justice in the Marcus Deon Smith Case
Photo courtesy of Kevin A. Smith.

At Southern Vision Alliance, it’s part of our mission to direct resources to innovative, bold grassroots efforts led by directly impacted communities across the US South. Through our “frontline funds,” we provide small grants to help groups scale-up their efforts, identify best practices, and deepen a diverse bench of leaders.

We support a series of related projects that help move resources to the frontlines, including the NoCap Fellowship, NC Disaster Survival and Resiliency School, and our Youth Engagement Leadership Pipeline. Currently, our major director led funds include the Queer Mobilization Fund, the Carolina Youth Power Fund, rapid-response funds and the new communication platform called SPROUT HUB.

In 2020, we brought on our first Director of Frontline Funds, Programs, and Strategy, Wesley Morris. Wesley is a Raleigh native and a graduate of North Carolina A&T University. For the past 13 years, he’s served as a community organizer with the Beloved Community Center of Greensboro. He brings to SVA a wide range of community organizing experiences and relationships.

We sat down with Wesley to ask about his vision for SVA’s Frontline Funds and the path that’s taken him here.

To start, how do you define “frontline funds”?

Frontline funds (FLF) are one way that SVA contributes to the health and wellness of communities across the US South and beyond. We support those on the frontlines who find themselves at a critical juncture of need and opportunity—direct action support, coaching, building out dedicated fundraising efforts, conflict resolution, rapid response needs, or simply the human need to be welcomed into a broader community of care.

While addressing these issues, we are building trusting relationships, based on solidarity, that will last beyond support for an event or urgent response. The idea is to use SVA’s organizational capacity to help build a network that cuts across borders of difference and create space for partnerships to happen—likely ones and unlikely ones, from farmers to artists and creators to labor organizations.

How do you see the balance of passing folks the bag and saying “do your thing,” while also leaning in and offering support?

Simply passing folks a bag as a form of charity is irresponsible. And it models a system that we’re trying to avoid. On the one hand, as an “intermediary,” we’re here to redistribute resources that are financial, operational and technical. But then there’s also a resource that can’t be quantified: relational power, the idea that when we struggle together against common problems our individual decisions become collective movements. In this way, the consciousness of the individual and consciousness of the whole are positively affected towards freedom, justice, internationalism, and human dignity.

Of course, the injustice folks face in the South are much bigger than any one organizational  need. The COVID-19 pandemic, especially, has brought to light issues that have affected our people for decades, if not centuries.

In the South, these forces aren’t wholly different from elsewhere in this country. There’s a culture of politics and policing that over and over again is not accountable to the communities most negatively affected by systemic poverty and systemic racism. Even during the pandemic, at the height of social grieving and loss, police forces have too often operated with abuse of power instead of peacemaking.

Dr. King had a powerful speech about this exact scenario,  two Americas—one affluent and thriving, the other that’s poor and systematically disadvantaged. For me, I believe in the dignity and worth of all people and in the Beloved Community. When you believe in this, that means you have to challenge the mechanisms that distort that humane view of ourselves and our neighbors. When we talk about visible health disparities —the US has an abundance of resources, but the decision making and political interest are concentrated in the hands of far too few people that are detached from the majority of the community. And then there’s systems that you can’t see, like neighborhood redlining, and loss of funding for public education making it more difficult to invest in creative solutions.

With this reality, I believe people have every right to work together to make alternatives. Creating what collective liberation and freedom from oppression can look, sound, smell and feel like. Creating and moving out of spaces for those who have been generally left out, mistreated, suppressed and pushed to last in line. Folks get to have a say in their conditions—and part of FLF work is to amplify and convene around these voices to the point that the whole society has to bear witness and make effective change.

Can you say a little about the experiences you’ve had that have led you to this analysis?

There are so many! I’ve been blessed to travel extensively outside the US. Two formative experiences were traveling to Ghana in West Africa, at 14 years old, and then traveling to Cuba years later.  Walking through a “Door of No Return” and understanding the impact of the trans-Atlantic slave trade. And then politically coming to awareness about the Cuban Revolution—the concrete conditions that caused it and the results.

When I was 23, I went to Bahia, Brazil, on a sojourn for ancestral wisdom, through spiritual and cultural exchange with a group of amazing guides. The community I learned from was primarily led by women, who practice “Candomble”—an Afro-Brazilian religion. Candomble taught me the importance of keeping traditions alive through daily practices, giving honor to nature and ancestry.

Was there a moment for you organizing in Greensboro that showed you what solidarity looks like?

There was a peace treaty movement among street organizations that began in 2007 and 2008. It was initiated by Jorge Cornel, who at that time was the leader of a street organization Greensboro, NC. It was also anchored by the Beloved Community Center. Through the movement, I got to help create unity across differences while expanding the movement against police abuse of power.

Our demands were related to police misconduct and creating an independent police review board. The community ended up creating one on our own. When we created the alternative, the community came and flooded us with letters, flooded us with stories. I participated in direct actions, marches, and meetings. It was a time that neighborhood leaders, students, ministers of different faiths, school officials, professors, and public officials came together to address the community problem of violence through a process we called the “paradigm shift”.

That movement led to 10 young people including myself engaging in a nonviolent sit-in at our city council. Five of us submitted ourselves to arrest. We were put on curfew, banned from city property. We understood all of this was a microcosm of what the community goes through on a larger scale. Jorge Cornel was made a political prisoner. He’s still serving what we know to be an unjust sentence. We are still organizing for his compassionate release in Greensboro.

Coming out of that experience, it pushed us to continue building community—convening meetings, developing newsletters, and hosting community dialogues. I carry these lessons into the ongoing struggle to find Justice for Marcus Deon Smith.

When you look ahead to what’s next in this work, what dreams do you have?

It’s tempting to believe that things are getting better in this political period than they actually are. We need to continue to apply pressure. To commit to relevant work and study. To create people power with direct services, supportive services and relationship building opportunities. The people who seek out justice, freedom and equity are the leaders.

Lastly, I really want folks to look back a few years from now after interacting with our FLF team and hear people say, “they were helpful for us to get done what we set out to do.” For folks to have felt another layer of support, safety and communication in service of freedom, justice and human dignity.